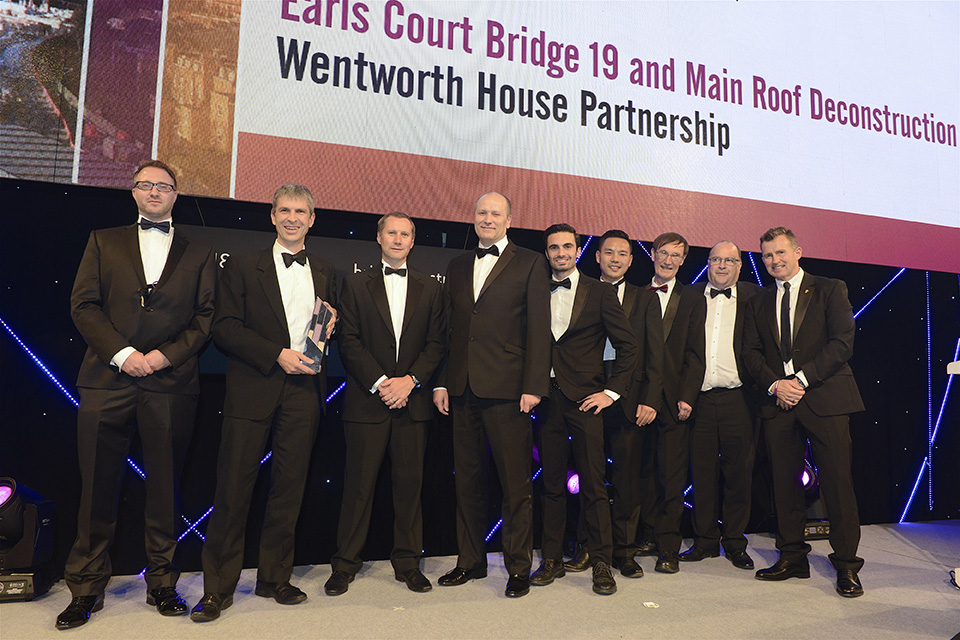 Wentworth House Partnership (WHP) had an extremely successful evening at the British Construction Industry Awards, taking home the award for Temporary Works Initiative of the Year as well as seeing four other projects win which were also worked on by WHP.

The British Construction Industry Awards are generally recognised as the most prestigious awards in the built environment sector, and were presented this year at a black tie ceremony at Grosvenor House Hotel in London.

WHP Directors Stuart Marchand and Stuart Vaughan led a delegation of eight team-members associated with the winning project to attend the awards show.

The winning project was the “Earls Court Bridge 19 and Main Roof Deconstruction” and, according to Stuart Vaughan, the entry “cited the collaborative and open approach to solving huge scale challenges, and the high quality engineering design. This allowed us to – in addition to the main demolition – slide out a railway bridge on Christmas Day, lower the 14000 tonne roof to ground as one piece, and remove the portals up to 1500 tonnes to clear the site for future development.”

To win the trophy, the project beat out seven other shortlist nominees, including Sir Robert McAlpine’s Wimbledon Court One redevelopment, and two competitive entries from the Robert Bird Group.

The BCIA judges reported that “[Wentworth House Partnership] clearly knew the job very well, and they explained the challenges and solutions of the project in an easy-to-understand way. The diversity and complexity of the temporary works used for the project was impressive, and while the judges felt the scheme had multiple packages which could have been shortlisted, Wentworth House Partnership’s entry scored top across the board, impressing the judges by taking care to meet each of the criteria. Of all the entries, the winners stood out with their plan to share knowledge gained on the project with the wider industry – something which is very important for the development of others.”

The other winning projects associated with WHP were:

Stuart Vaughan congratulated his team on the hard work they had put into this success. “Winning the award is recognition for the whole team involved across WHP and Keltbray, and an opportunity for us to demonstrate our capability in demolition, temporary works and geotechnical engineering in a rigorous rail environment.”